clock crackles to life, filled with static it begins to play the latest pop hit. My eyes open. Okay, one eye opens. I squint at the numbers, shining much too bright, much too early. It’s 6:52am, if I don’t get up I’ll be late for school. I hit snooze and roll over.

It’s Monday morning and in Afghanistan, a girl who looks nothing like me opens her eyes. She needs no alarm; she rises with the sun and starts

to get ready. She doesn’t want to be late for school.

The radio clicks on again, it’s 7:17, I’m definitely going to be late. I roll out of bed, throw on my uniform and glare at my reflection in the mirror. It’s Monday morning and I’m not “feeling” school today.

She wraps a scarf around her head, letting only her eyes peek out. You can’t see underneath but, she’s smiling. It’s Monday morning and her fingers are crossed that today she can go to school. Last week it was cancelled; she’s not sure why.

Mom drives me to school and I half listen to her lecture about not missing the bus, half wonder if I’ll be able to get away with a nap in English class. It’s Monday morning, I’m too tired to even consider trying to do any work.

She is led to school by her little sister…or little brother depending on who’s asking. She can’t leave the house without a male escort; this way they can both go to school. It’s Monday morning and they take a different route than last time, avoiding suspicion.

I arrive in first period, find my classroom in the long hallway, sit down with 20 other students. I barely hear the lesson and chat

through the work period. It’s Monday morning and even the teacher doesn’t really care. I count the hours until I can go home

She arrives at a one room house, sits down with 80 other girls, each of who know that what they are doing is forbidden. She keeps both eyes on the teacher but one ear towards the door. It’ Monday morning and whispers are flying that their secret is out. She stays because she wants to learn how to solve the math equation on the board.

The other girl and I go through our day, same earth, different worlds.

The worst part of my day is when the café is out of chicken salad wraps. The worst part of hers is when the soldier enters the room. I complain to my friend while eating pasta instead. He puts a gun to her head. I mutter “School makes me want to die”. He pulls the trigger.

She just wanted to learn to solve the math equation on the board.

It’s Monday morning. The other girl is gone. I am still here, wishing I weren’t. A girl who looks nothing like me was still just a girl. She just wanted to learn how to solve the math equation on the board.

Tomorrow is Tuesday morning. I will get up and moan about school again, she won’t get up at all.

There was an error retrieving images from Instagram. An attempt will be remade in a few minutes. 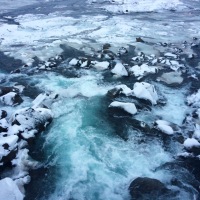